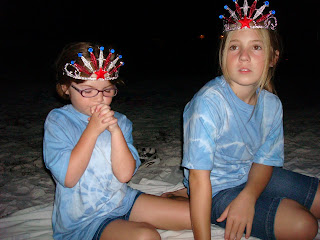 Yesterday, as the girls and I were finishing up lunch around the dining room table, our conversation somehow stumbled upon Santa Claus and Christmas presents and in the back and forth and all the talking over one another Ashtin leaned in and whispered to me, "Paula... Santa isn't real." I nodded to acknowledge I'd heard what she said but that didn't satisfy her and as the other girls continued with their conversation, Ashtin turned to me and demanded, "Paula, do you believe in Santa?" I looked at each of my children and told them the very same thing I've been telling children for the past ten years, "Of course I do because he still brings me presents! Doesn't he bring you presents?" As they all began to shake their heads and tell each other just how real he is, I reminded them, "Santa is always real to those who believe in him."


We went about our day the same way we go about most. I've never been one to make a huge fuss out of holidays so even though it was the fourth, there were no BBQ's or huge homemade fireworks shows. We took the kiddos to buy groceries, and watched them fall all over themselves on the Slip-n-Slide and the trampoline. At eight o'clock we finally left for the beach to catch the city fireworks display (the one they all found extremely disappointing).


As I tucked Ruth into bed last night I wanted to address what Ashtin had said earlier because I know how important Ruth's beiefs are to her...both the ones I've given her and the made up ones she's instilled in herself. So, I said, "Ruthie, earlier today Ashtin told me she doesn't believe in Santa Claus..."


"Really?" she said, as she crawled underneath her covers. "You believe in him though, don't you?" "Of course I do babe, who else is gonna bring me my diamonds?" and I leaned down and kissed her. "Well, if I ever got any really big presents...I'd share them with you. I wouldn't keep them all to myself."


And with that, Ruth's eyes lit up and she nearly leapt from her bed.


"Mom! That wish I made tonight...well, it was for you. I wished that you weren't poor anymore and that you had enough money to stop worrying about your bills. I love you."

Then she reached her arms out and wrapped them around my neck.

And that's where it gets complicated. Part of me is completely overwhelmed with how much my daughter cares about me but the other part of me steps back and thinks I've crossed the line between my kids knowing we're not rich and knowing just how much I worry about stretching my dollars every month.

(and I shake my head)

Posted by PaullaWalla at 9:45 PM

aww you are the best mom EVER!