Ruth is the most awesome seven year old.  I won't lie.  She's the sort of kid who leaves an impression on people.  You walk away from a conversation with her and you're either smiling, laughing, or shaking your head in a "Wow, she is wise beyond her years" sort of moment.

It's just who she is.

You don't know how many times I've described her as a thirty year old trapped inside a tiny body...

I've probably been describing her like that since she was four.  A year or so ago I began to notice other people would meet her and be so charmed by her yet at the same time the only way they could think to describe her was, "She's so grown up!  It's like she's thirty years old and she's only three feet tall!"

I always laugh and agree with them because, hey...

If the shoe fits, why not wear it?

There's just one problem.  It's not really a problem but it is a problem.

To be quite honest, Ruth is perplexed and horrified by a lot of normal, everyday, average kid things...  Do you know how hard it is to spend all day with the most rational, logical seven year old on the planet only to watch her physically implode over cool things like playing baseball, riding skateboards, jumping in the ocean, swimming, amusement park rides...

Over time, she's overcome some things.  She'll swim in the ocean now as long as she can reach me with her hand.  She'll swim in the pool because she's had three years worth of lessons... but the first fifteen or twenty times you tried to drag her near those things?  You'd think she were...well... you'd probably think she was a little bit special.

I've decided she is.

I told Ruth I wanted to go for a walk today and she said, "I think I'll ride my bike instead of walking beside you."  Next thing I know this is how Ruth comes out of her bedroom... 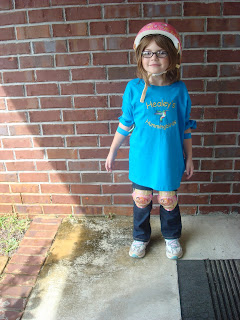 Notice the array of protective gear... Not only is she wearing the requisite helmet, she's also got the knee and elbow pads.
Here she is, just before we headed out of the driveway... 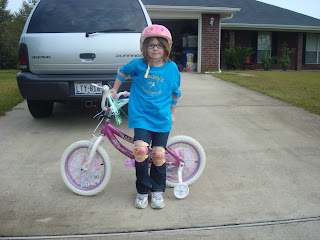 Anyone notice the training wheels?  Even with every safety measure on the planet Ruth still refused to ride that bike for the last two years because there was a slim possibility of her dying in the process (I swear).
Today was a HUGE milestone for us.
HUGE.
Because, you see... the problem that isn't really a problem but sort of is when your amazing seven year old is really more thirty than seven?
Ruth isn't fearless.
Ruth is rational and logical.  She assesses a situation and all the possible repurcussions and consequences.
She thinks.
Often, I think she thinks too much.
I like having someone who gets my humor, my wit, my sarcasm, and can hold an intelligent conversation with me but sometimes it makes me sad that she can't just let it all go and have fun.  Oddly, she and I have had several "grown up" conversations about this.
We've set goals.
Her biggest goal has been to identify when she can't readily achieve something so she can then find her own way to accomplish the task.
Today, as she took off in front of me giggling, I was so proud.  Really...just beaming.
(want to see the video?  It's in the blog post just below this one)
She found a way to get herself on that bike and be okay with it.
She may not be fearless but she's mine.
When we pulled up into the driveway after our walk, Ruth jumped off her bike and said, "Whew!  That was a great first ride but the best part was no children were injured or killed today!"
I think that says it all.
Posted by PaullaWalla at 9:15 PM