I'm about to compare my daughter to a tiny, feisty dog.

You heard me right.

Ruth reminds me of the mighty chihuahua.

She's small, she's saucy, and she has no idea when she's the smallest dog in the room.

Last night, I put Ruth in charge of handing out candy to our trick-or-treaters.  She was methodical in her approach.  Chocolate candy was poured into one container.  Not chocolate candy was poured into a second container.  Both candy containers, chocolate and not chocolate, were strategically placed within arm's reach of the front door.  Light switch A and light switch B were both flipped to the illuminant position and Ruth, bewitching witch hat upon her head, paced back and forth and forth and back in front of the front door.

The doorbell did not ring.

Ruth looked out the windows.

Ruth took her hat off.

Ruth put her hat on.

Ruth opened the door and made sure all the outside lights were in proper working order.

Then she realized what was missing! 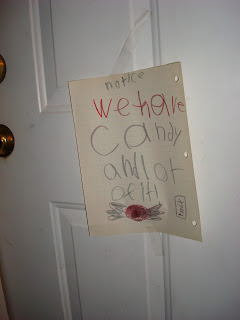 Almost immediately, the doorbell began ringing and those tricksters were treating.

Ruth handed out candy to a steady stream X-Men, devils, and princesses, asking each of them, "Would you like chocolate or not chocolate candy in your bag?"

Around eight o'clock, a rowdy group of teenagers rang the bell.  There must've been six or seven of them and they rushed towards the door as soon as Ruth opened it, yelling "TRICK OR TREAT!!!"

Ruth put her hands on her hips, started tapping her foot, and told them like it was...

"You guys are going to have to calm down and form a line if you want candy at my house."

Then she actually stood there, still tapping that foot, and waited for them to line up before asking them, "So, would you like chocolate or not chocolate candy in your bag?"

When the last one turned away and left, Ruth closed the door and sighed, "Mom, did you see those teenagers?  They DID NOT want to listen!"

...and then, "Who lets teenagers go trick-or-treating anyway?  Geeze!  Someone should tell them to stay home."

That's my daughter for you...

The mighty chihuahua.
Posted by PaullaWalla at 9:02 PM

I have said it before but I must say it again... She is AWESOME!!!!

Oh man, I love this so much. Ruth is going to save the world someday.